The nation’s top-selling master-planned communities sold homes at a quicker pace in the first half of 2015 than they did in 2014, increasing by approximately 15%, as lot inventories increased and market sentiment improved in various metro areas. For over 20 years, RCLCO has conducted a national survey identifying the top-selling MPCs. We recently surveyed MPCs throughout the country to determine the top-20 selling communities for the first half of 2015. As a group, total sales were up from 2014 levels, with most developments experiencing strong increases in sales volume. For example, sales at Stapleton in Denver are up 30% in 2015, after an 11% decline in sales in 2014. For communities that showed a decrease in sales, most developers cited a reduction in lot inventories resulting from stronger than expected demand conditions in 2014 as well as inclement weather during the first part of 2015. The chart below summarizes sales for the first half of 2015 compared with the first half of 2014. If the current sales pace at the top communities continues through the remainder of the year, 2015 will prove to be much stronger than 2014, which experienced an approximate 20% decline in sales during the second half of the year.1 Sales have rebounded sharply since the late 2014 slowdown, with sales up over 40% in the first half of 2015 over the second half of 2014.* 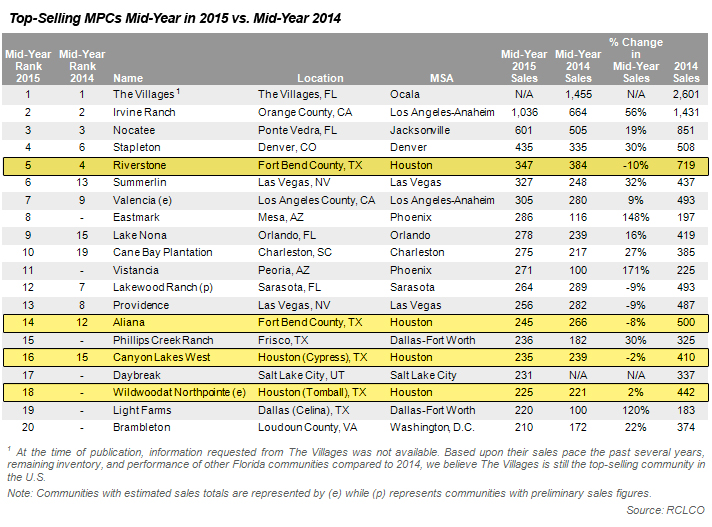