The primary markets of Houston and Dallas, followed by Austin, feature most of the top-selling MPCs in the state. In fact, the Houston MSA has the largest number of MPCs on the top-50 list, with 10 top-selling communities. The second-largest market in Texas, Dallas, features four top-selling communities. Relatively good land availability and robust employment growth continue to drive demand for large-scale MPCs in Texas. Close-in large-scale sites accessible to major transportation infrastructure in high-job-growth markets has proved harder to find in many other areas, and Texas continues to lead in that respect. Southwest Houston continues to account for the highest concentration of top-selling communities in the region, with Fort Bend County accounting for four of Houston’s top-10 communities. Cypress, a suburb northwest of Houston, also has a large number of top-performing communities, including Bridgeland, Canyon Gate, and Towne Lake. These communities attribute such strong sales to job growth, along with their experiential amenities and event programming, including community socials and fitness events. Despite significant flooding due to Hurricane Harvey in many areas to the direct west and south of central Houston, newer large-scale MPCs avoided the worst of the flooding, and sales in the northwest and southwest suburbs have remained particularly strong. As the Houston region rebuilds in the wake of Hurricane Harvey and employment growth continues to recover to historical norms, it is likely that these top-selling communities will continue to achieve success. 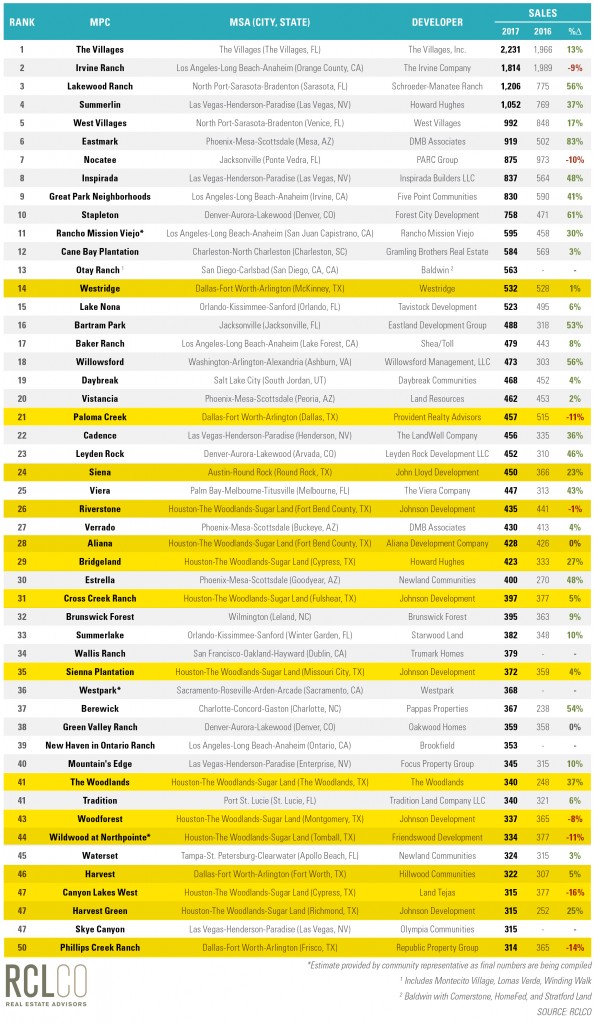